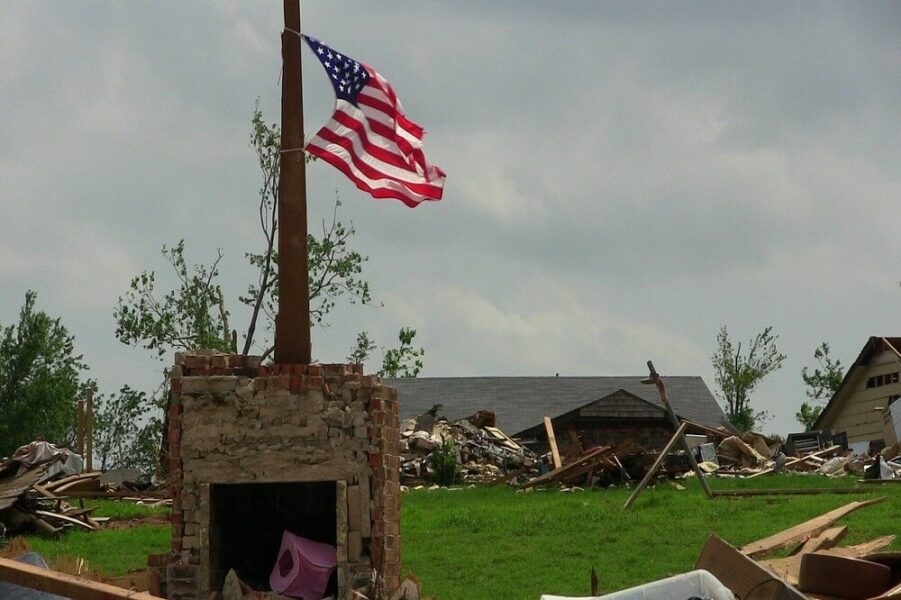 Once a tornado warning has been issued you could have just minutes to seek shelter, wait in out, and survive. Here’s everything you will need to know about how to survive a tornado and a few extra safety tips.

How to put a plan in place?

Even when there are no clouds in the sky you should still stay prepared for a tornado tо hit. One of the top tips you could ever follow it to make sure you have a survival plan put in place to keep your home and your loved ones safe during one. You should also have lists of all of the telephone numbers you may need in a weather emergency, including local services such as gas and electricity as bad weather can affect these too.

What’s the difference between a tornado watch and a warning?

When tornado is set to hit, a watch will be called so people know to stay in their homes or underground shelter. A warning will be issued when the tornadoes are local to you and are definitely hitting your area. Once the warning has been issued it’s time to snap into action. Go over the emergency plans with your family, check that you have enough food and water, plus other essentials to survive stored up and head to your safe shelter.

These warnings are there to tell you that a tornado is heading your way and it’s appeared on weather radar. This is the time to move to your shelter which could be an interior room of your house or the nearby basement. Wherever it may be, the shelter should on the lowest floor or underground, and mobile homes should be completely evacuated.

Tornado warnings will be for a specific area, usually just the city or county they are coming to. The watches on the other hand can cover an entire state, made to keep a higher percentage of the population on the lookout.

Set Up A Safe Room

Another step in how to survive a tornado is to have a safe room set up and ready to go. In the USA alone there are on average 1000 tornadoes every single year. In the past decade, over 1000 people have been killed because of them – it can reach speeds of up to 250mph. If that hits your house, the structure won’t make it but you can still come out unscathed.

Areas that experience a lot of tornadoes should have houses with a shelter or safe room built into it. These shelters help you to survive a storm with the maximum amount of protection possible.

What to stock up?

Now you’ve got your shelter in place for a tornado emergency, it’s time to stock it up. This shouldn’t become a dumping ground or storage closet for the useless jump. Keep it organized and ready to go at the drop of a hat. After all, a wind storm can hit at any time wherever it wants to. Stock your shelter with a storm survival kit which should include:

It’s completely normal to focus on your home and the building itself, but outside is just as important too. Flying debris and objects that could harm you should be strapped down or brought inside if you know a tornado is likely happening soon.

Should I stay away from windows?

A tornado reaches massive wind speeds, and it’s this speed that can cause damage. One of the first things to go will be the windows. Stay away from windows as part of your tornado safety procedure because the flying debris like glass and wood shards can potentially be lethal. The best place to keep away from these building hazards is in the interior room on the lowest floor of the building. Stay there until you are given the all clear that the weather has passed.

If you don’t have a dedicated safe room or underground shelter for tornado season, there are still other rooms in the house you can use to escape the harsh weather conditions. You don’t want anywhere that is too near the exterior walls and windows. Once inside, barricade yourself in with soft items like blankets, pillows, cushions and mattresses. These all can protect you from the flying debris a tornado brings with it.

What are the common myths about tornadoes?

There are so many ‘advice’ blogs and well-meaning folk out there that will give you tips on how to survive. But a lot of these tips simply won’t work. For example, one of the myths says opening the windows in your home during a tornado so that the pressure can be equalized. This is completely wrong and can end up doing you a lot of harm. Opening a window can cause the roof of your house to be lifted off as well, exposing you and everyone else inside to the elements.

Also, setting up shelter in the southwest corner of a room or basement might not be the safest spot either. The tips you should follow in this instance is finding a place for bunking down anywhere that isn’t near an exterior wall or window. A tornado doesn’t have a specific spot it will hit like the myths say, so there’s no one spot that is any safer than another.

What are the nature’s signs of a tornado?

Knowing how you can spot nature’s signals when a tornado is coming close can be more helpful than tuning in for a news bulletin. It happens very quickly, so officials may not even have time to report they exist before it’s on your doorstep. Most of these freak storms happen in the afternoon and there are a few telltale signs that one is about to happen. Signs of a possible tornado hitting are if the sky turns an almost pea soup green color and the clouds lie low and dark. Spotting a twister or a wall of the cloud is also a concern as well.

If you see whirling dust and debris under a cloud base, this is a tornado. They don’t have a tunnel at their center. Heavy rain or hail might begin and then stop dead in its tracks. There is a moment of peace before an intense shift in the wind and most get wrapped up in heavy rain so they can’t be seen.

Many people mistake the onset of a tornado for thunder because of the low and loud rumble it makes. However, unlike thunder this noise won’t fade away in a matter of seconds. You will continue hearing it and it may even sound like it’s getting closer.

Be Aware Of Tornado Season In Your Area

There are areas of the country that are much more prone to tornadoes hitting than others. Knowing how to prepare for one in these places is much more important than preparing for one to hit in England, for example, where it’s probably never going to happen.

If you know that tornado season is up , you can make a habit of tuning into the weather forecast each day to check if there are any imminent risks of severe weather. Note how close the storm’s path may be to your home, your workplace or a location you have to travel to regularly.

Once a tornado watch has been issued you should start to prepare and adjust your plans accordingly. A watch being given is just a tap on your shoulder to say be on your guard. Once the warning has kicked it’s time to get up and get into your shelter. A warning is a serious thing and you should move at once because of every second count in this situation.

If the tornado ends up passing and doesn’t hit your area, then great! You can take this as a drill and find out what parts of the plan need to be worked on for the next time a warning is issues.

Even in the most tornado prone areas, the risk of your property actually being hit by these wind storms is actually quite low. But this doesn’t mean you shouldn’t be prepared for them. Those people who have prepared properly and follow all of the proper safety tips for survival in a tornado have a much better chance of coming out unharmed on the other side.

What if you are caught outside during a tornado?

All of these tips so far have been if the weather affects you when you’re safe and tucked up at home. But what happens if tornadoes come and you are outside? Often if you are outside there won’t be a readily available shelter to get away from the weather. How do you stay safe? Find a ditch or low lying ground to crawl into. Once you have found a suitable spot, cover yourself as much as possible, especially your head. You should try to keep a good distance away from cars and trees which a tornado can easily pick up and blow onto you.

What About If You’re Driving During A Tornado?

Another common problem is if you’re driving and the tornado hits. It is weather after all, and it’s completely unpredictable when and where they might take place. If you are in a car and there isn’t much traffic around you may be able drive away and out of the path of the oncoming tornado by driving at right angles alongside it. If you can’t escape it in this way, you should park your car safely somewhere off the road. You should never try and park under bridges or tunnels as these give you little or no protection and you could also end up causing serious traffic accidents.

Where Is The Safest Place To Be During A Tornado?

There’s nowhere that’s completely safe from a tornado but there are places that are safer than others. A sturdy safe place includes basements. Basically anywhere underground is where you want to go.

What Do You Need To Survive A Tornado?

The first basic necessities you will need are water and food – at least enough until you leave your safe place after a few days when the winds have died down. The next thing you will want is a medication that anyone in your shelter has to take. A first aid kit should be part of your survival kit as well as a flashlight, an emergency radio, and an air horn or whistle.

What Should You Not Do During A Tornado?

The biggest thing you should never do during a wind storm is to leave your safe place before it’s okay to do so. The local authorities will be able to tell you the right time to leave.

How To Survive A Tornado Without A Shelter?

If you don’t have a shelter available during a storm, there are other alternatives although they are risky, so try to avoid them where you can. The first is to crouch under furniture that is bulky enough to not move during the wind, such as a table. If you are outside you need to find a ditch or somewhere low to the ground to lie in while the storm passes.