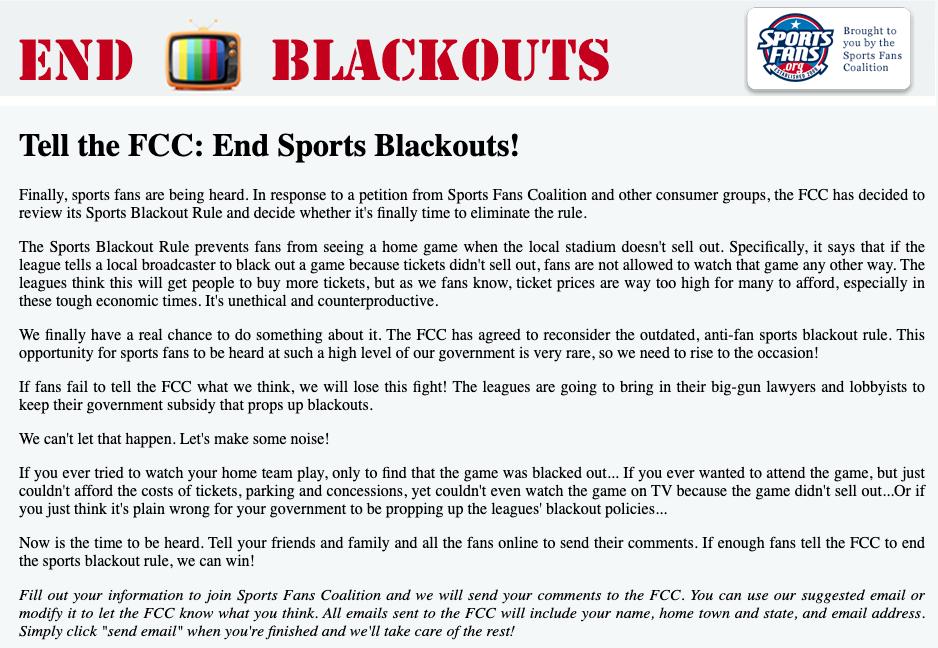 The idea of the Sports Blackout rule was designed to prevent local team fans from seeing a game plaid at home when the stadium doesn’t fully sell out.

Specifically, it says that if the league tells a local broadcaster to black out a game because tickets didn’t sell out, fans are not allowed to watch that game any other way.

The leagues think this will get people to buy more tickets, but as we fans know, ticket prices are way too high for many to afford, especially in these tough economic times. It’s unethical and counterproductive.

This is the email that they designed to send to FCC to remove the Blackout rule:

It’s time to end to the Sports Blackout Rule. The rule is an unnecessary and anti-consumer regulation that only benefits team owners. Fans and taxpayers already heavily subsidize professional sports through publicly-funded stadiums, tax breaks, anti-trust exemptions, and other benefits. Instead of using those resources to better serve fans, sports leagues turn around and black out games.

The site did well and eventually the FCC Sports Blackout rule was abolished and changed in favour of the site.

What are the Sports Blackout rules Now?

There are no sports blackout rules now, the FCC repealed it.

What can you do if an event is blacked out?

You can complain to the FCC immediately. You can also contact your local TV station or broadcast channel to enquire about the situation.

You can register your preferences with you broadcasting or cable provider for future use.